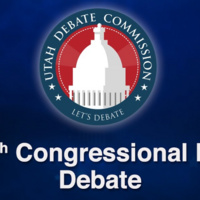 Salt Lake Community College will be hosting the 4th Congressional District Debate sponsored by the Utah Debate Commission. The debate between Mia Love and Ben McAdams will be broadcast live from 6 - 7 p.m. in the Karen Gail Miller Conference Center on the Miller Campus.

Those interested in attending the debate may contact Marianne Buie at (801) 957-2004, or marianne.buie@slcc.edu in the Office of Government and Community Relations.

Bags will not be allowed in the venue, nor will campaign materials, including campaign t-shirts, buttons or signs.